One must move on in life, no matter what circumstances you may come through. Yes, life is like a river, which must flow on and continue its journey beside the obstacles it may face on its way. This is the teaching we learn through a great theoretical physicist, Albert Einstein. Through his wonderful words above he made us aware of the realities of life. His words enlighten us about life and urge us to make a balance in our life so that it keeps on moving without fearing any hindrances which may appear.

Albert Einstein, a German-born theoretical physicist, was born on 14th March 1879 at Ulm, in Wurttemberg, Germany. His father Hermann Einstein was an engineer as well as a salesman and his mother was Pauline Einstein. He began his schooling at Luitpold Gymnasium in Munich. Later, his family moved to Italy where he continued his studies at Aarau, Switzerland. In 1896, he entered Swiss Federal Polytechnic School in Zurich to get training of a teacher in physics and mathematics.

In 1901, he earned his diploma, and then he became a technical assistant in the Swiss Patent Office, as he failed to find a teaching job. Then in 1903, he married Mileva Maric and had a daughter and two sons, but the marriage was not successful and he married to his cousin, Elsa Lowenthal. Finally, in 1905, he got his doctor’s degree in the same field.

Einstein always had a clear perception of the problems of physics and was determined to find the solution for those problems. He made his own strategy and was capable of visualizing the main stages to reach his goal. He defined his major achievements as mere stepping-stones for the upcoming advance. 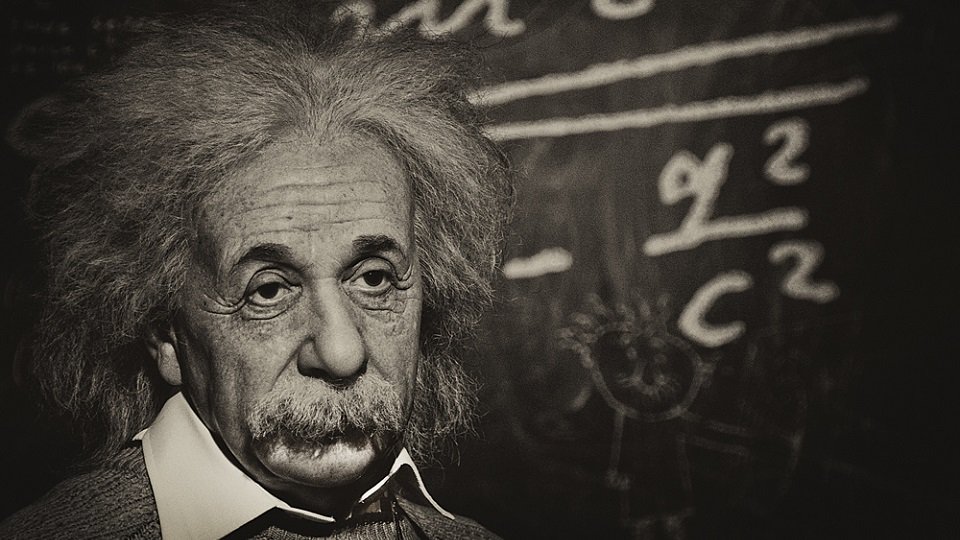 In his scientific research, he found the inadequacies of Newtonian mechanics and his special theory of relativity stemmed from an attempt to reconcile the laws of mechanics with the laws of the electromagnetic field. He dealt with statistical mechanics and issues which were merged with quantum theory. He examined the thermal properties of light with a low radiation density and his observations laid the foundation of the photon theory of light.

In the 1920s, he accomplished many other achievements and valuable tasks in the field of physics. He invested his time in statistical mechanics by his development of the quantum theory of a monatomic gas & connection between atomic transition probabilities & relativistic cosmology.

In later years he continued contributing towards the unification of some concepts of physics, taking the opposite approach, geometrization, to the majority of physicists.

Albert Einstein’s work was very well appreciated and was counted in the major contribution in the field of physics & mathematics. Some of his famous work includes, “Special Theory of Relativity”, “General theory of Relativity”, “Investigations on Theory of Brownian Movement”, “The Evolution of Physics”. Among his non-scientific works, “About Zionism”, “My Philosophy” etc. are some of his greatest achievements.

In 1922, Nobel Prize in Physics 1921 was awarded to Albert Einstein for his contribution to Theoretical Physics, and especially for his discovery of the “Law of the Photoelectric Effect”.

Albert Einstein, a legend came to an end forever on 18th April 1955 at Princeton, New Jersey.

“Life is like riding a bicycle. To keep your balance you must keep moving.” – Albert Einstein 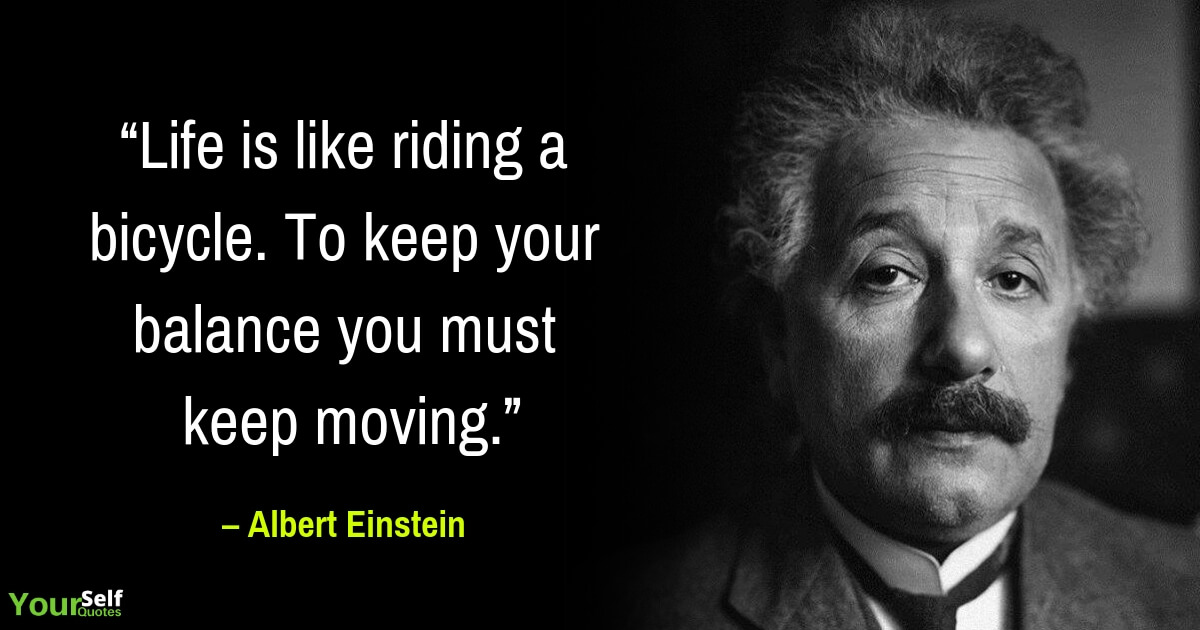 “I have no special talent. I am only passionately curious.” – Albert Einstein 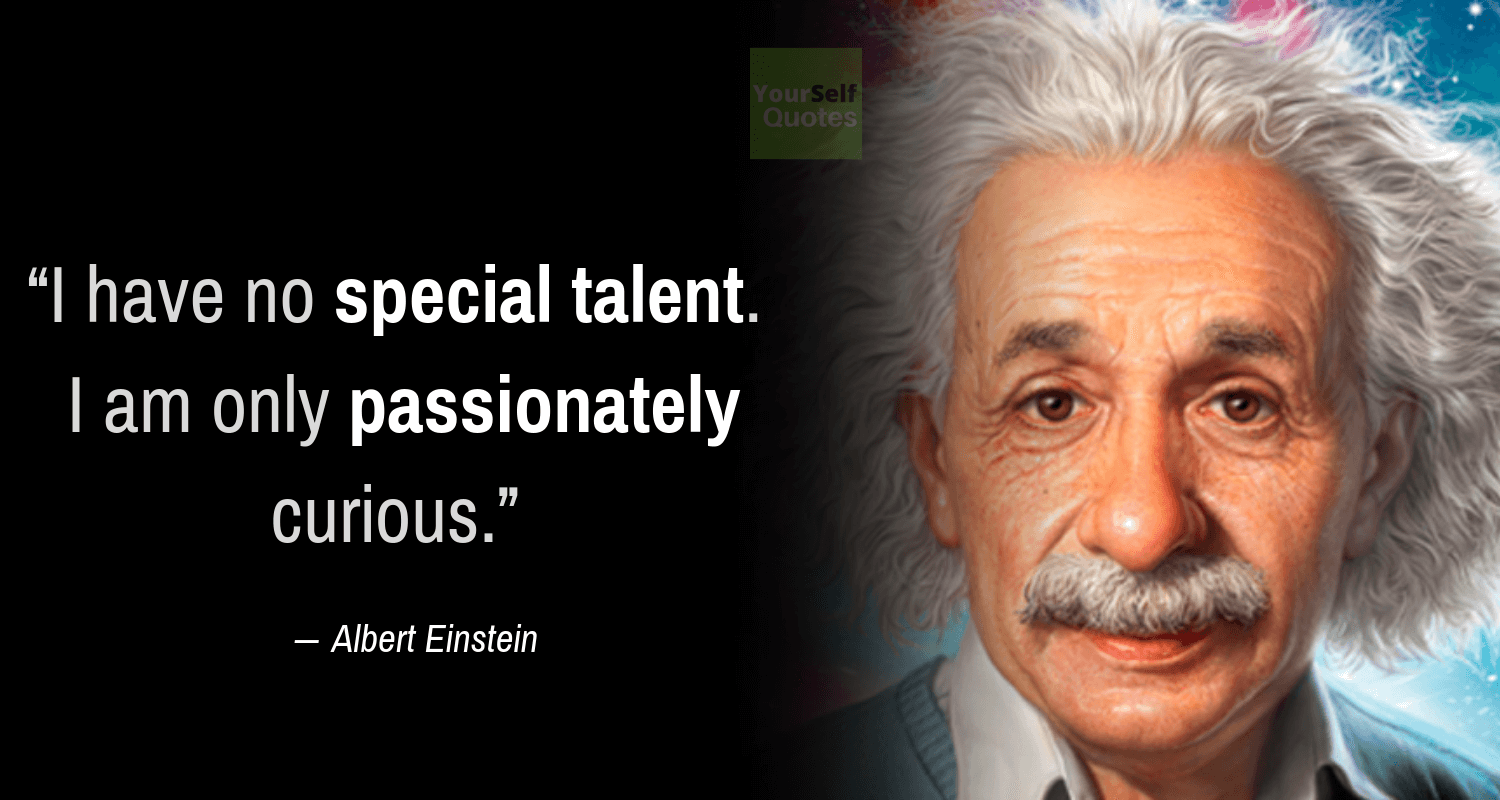 “Everything that is really great and inspiring is created by the individual who can labor in freedom.” — Albert Einstein

“The best way to cheer yourself up is to cheer somebody else up.” – Albert Einstein 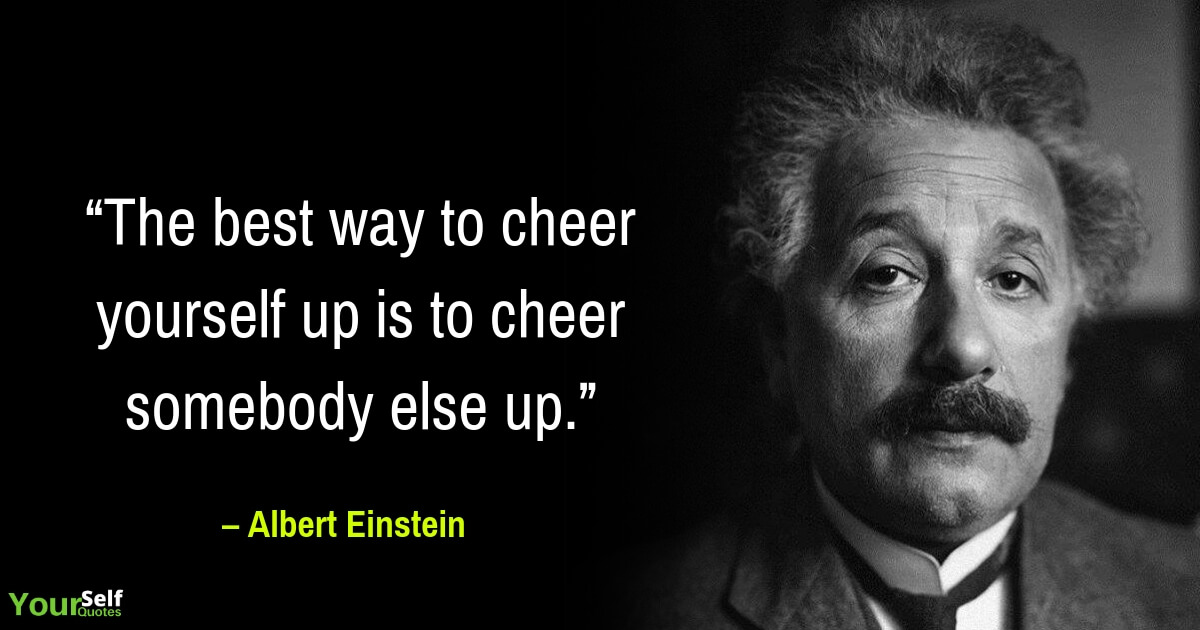 “A life lived for others is a life worth Living.” – Albert Einstein 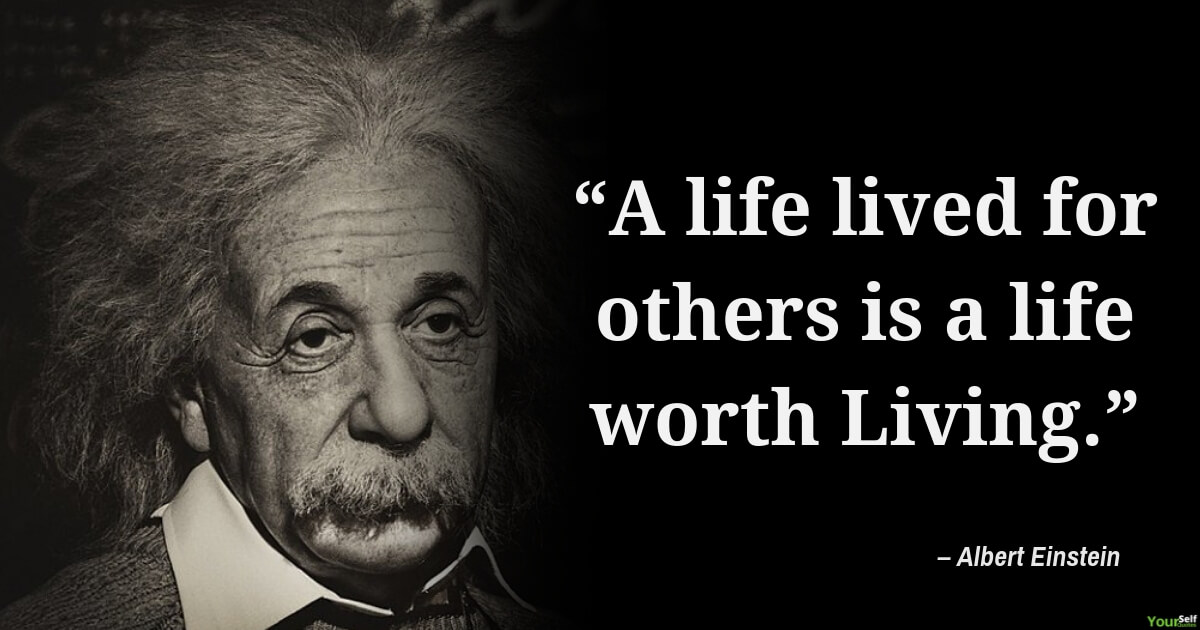 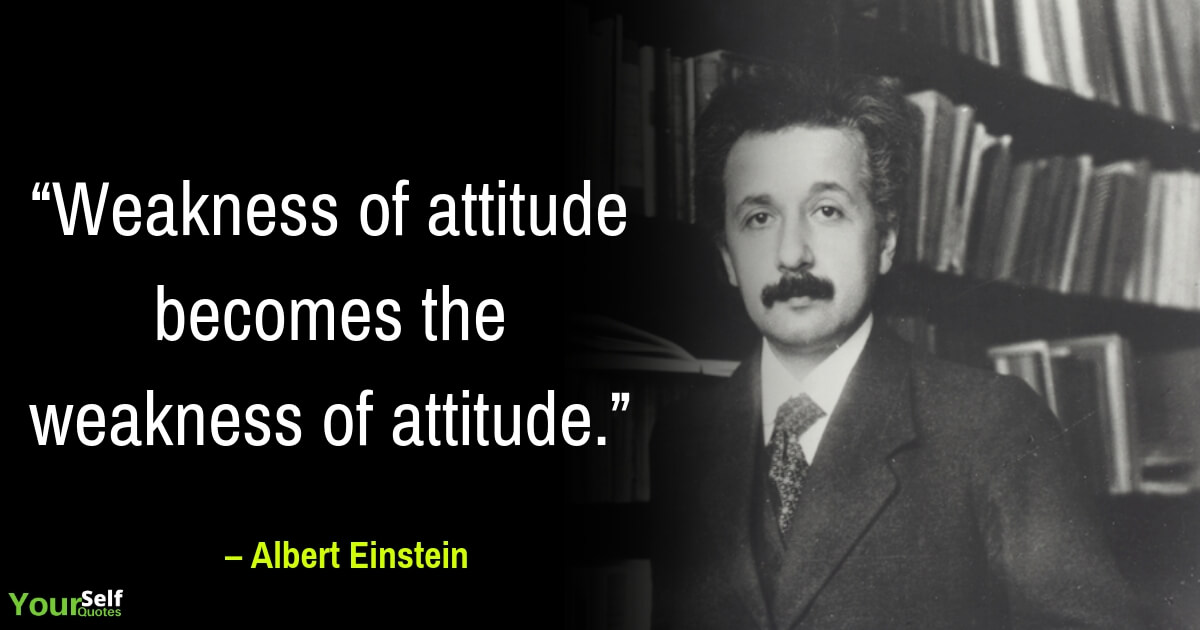 “The true sign of intelligence is not knowledge but imagination.” – Albert Einstein 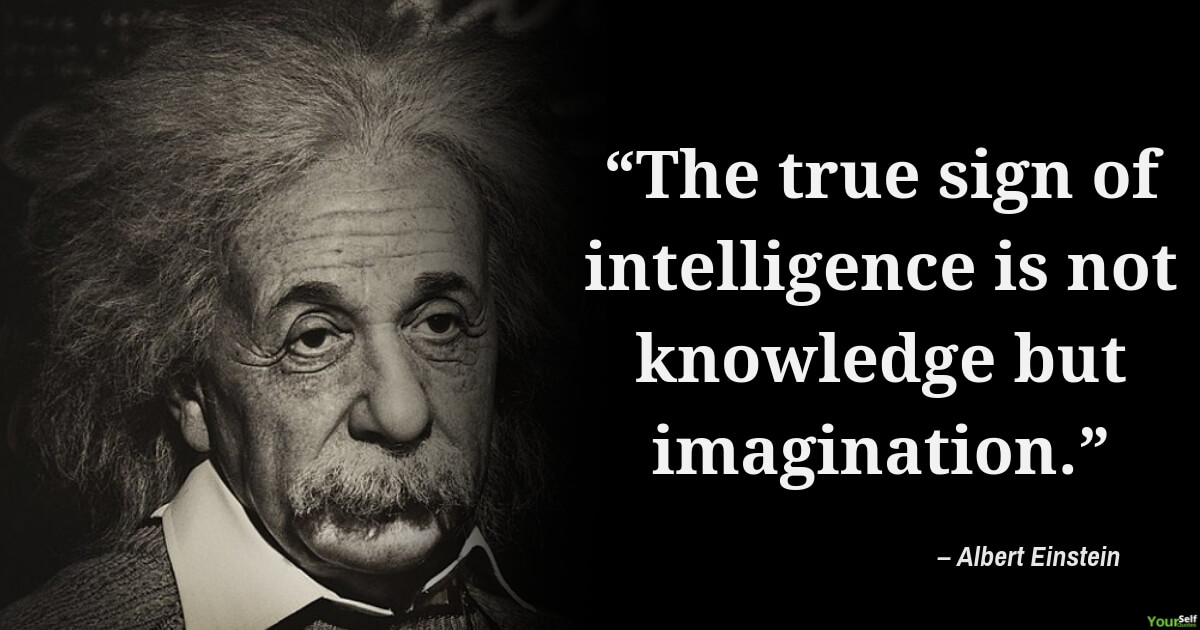 “If I were not a physicist, I would probably be a musician. I often think in music. I live my daydreams in music. I see my life in terms of music.” – Albert Einstein

“Everybody is a genius. but if you judge a fish by it’s ability to climb a tree it will live it’s whole life believing that it is stupid.” – Albert Einstein 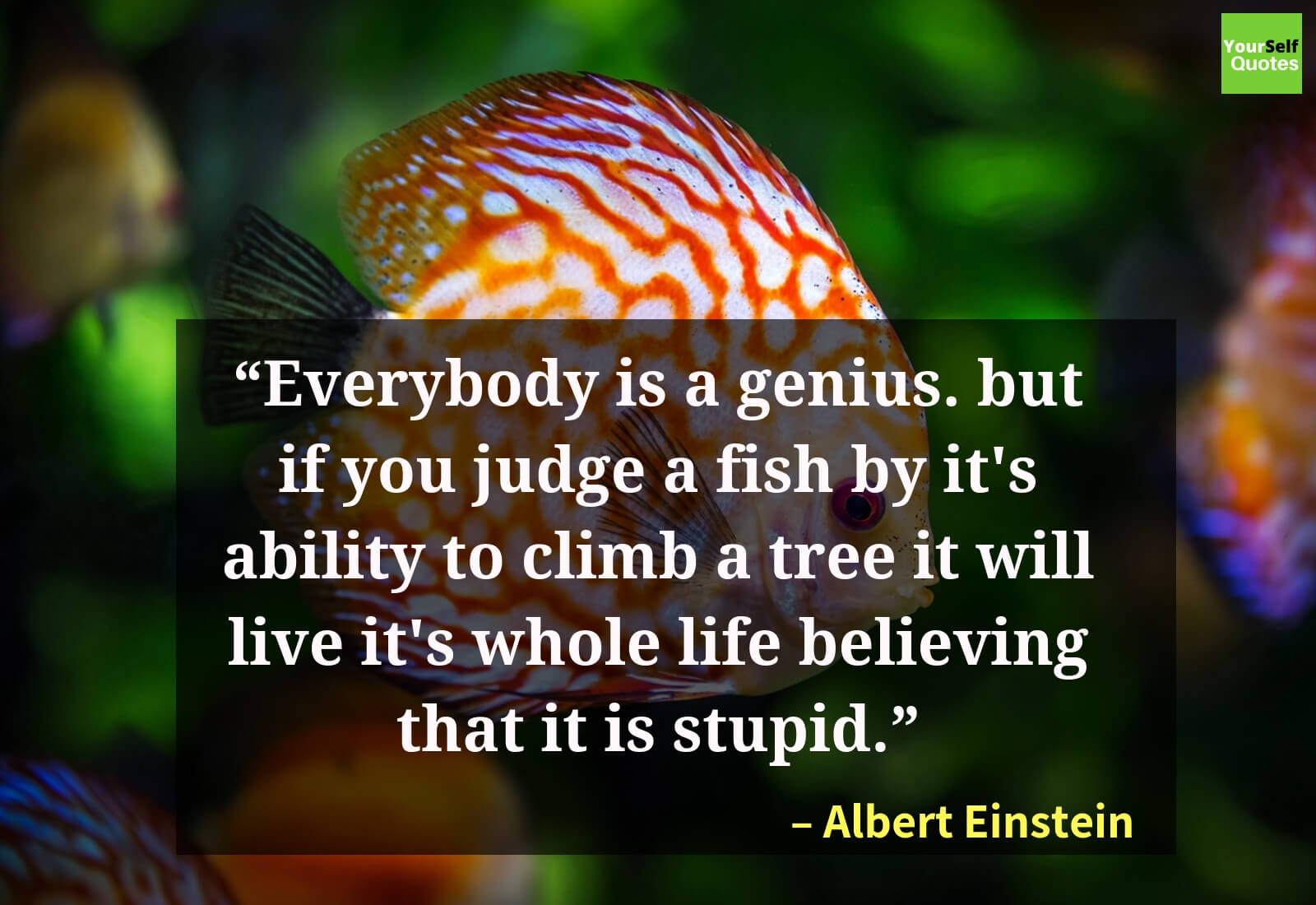 “Our task must be to free ourselves by widening our circle of compassion, to embrace all living creatures and the whole of nature and its beauty.” — Albert Einstein

“Look deep into nature, and then you will understand everything better.” – Albert Einstein

“I do not believe that civilization will be wiped out in a war fought with the atomic bomb. Perhaps two-thirds of the people of the earth will be killed.” – Albert Einstein

“The Human Spirit must Prevail over Technology.” – Albert Einstein

“We cannot solve our problems with the same thinking we used when we created them.” – Albert Einstein 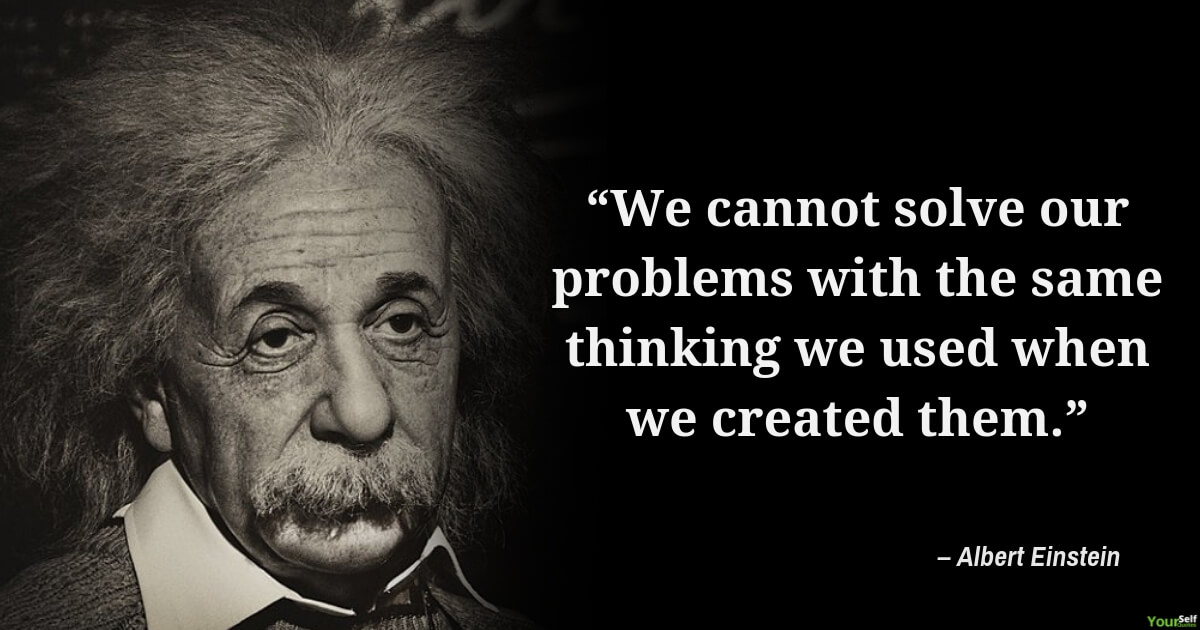 “Education is not the learning of facts but the training of the mind to think.” – Albert Einstein

“Education is what remains after one has forgotten what one has learned in school.” – Albert Einstein 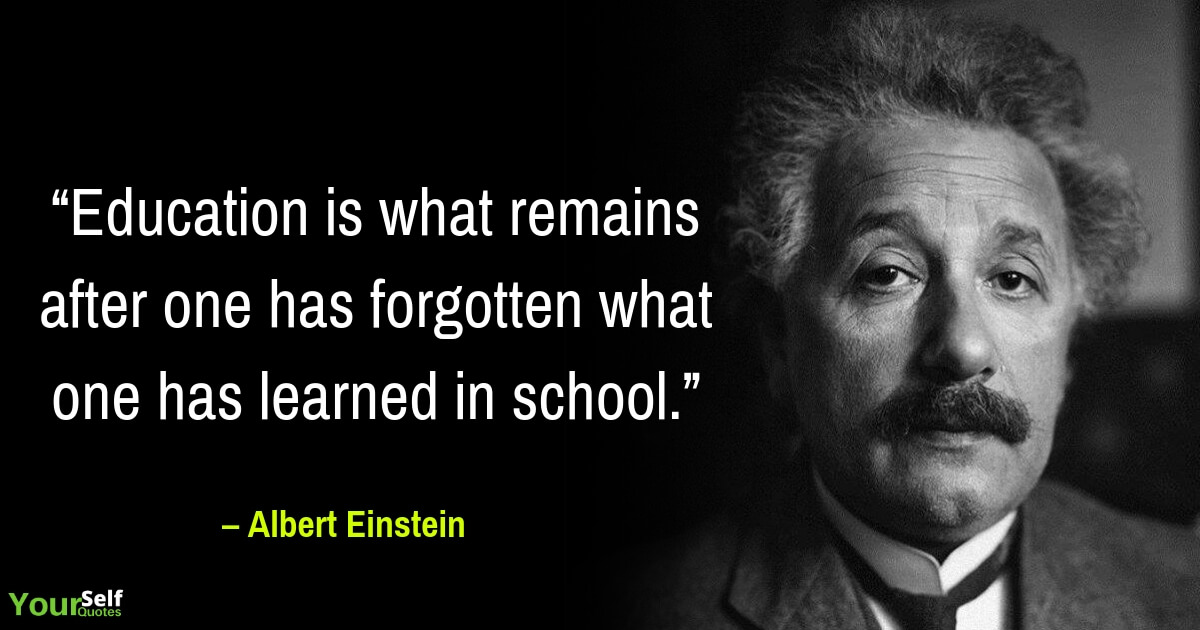 “Without deep reflection, one knows from daily life that one exists for other people.” – Albert Einstein 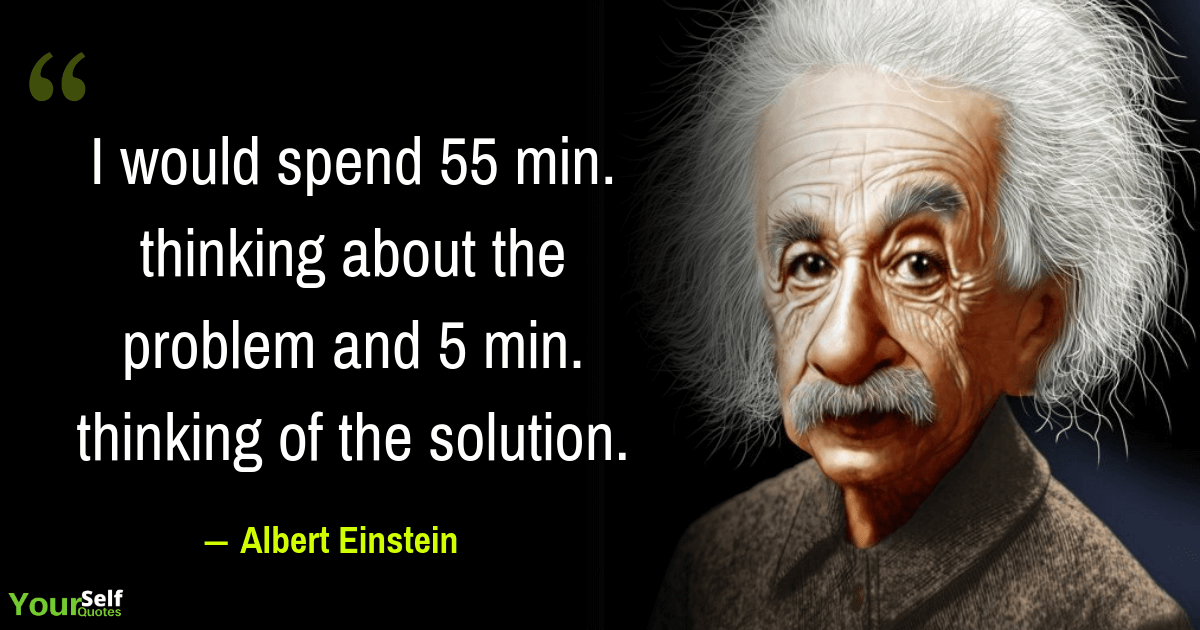 “Only two things are infinite, the universe and human stupidity, and I’m not sure about the former.” – Albert Einstein 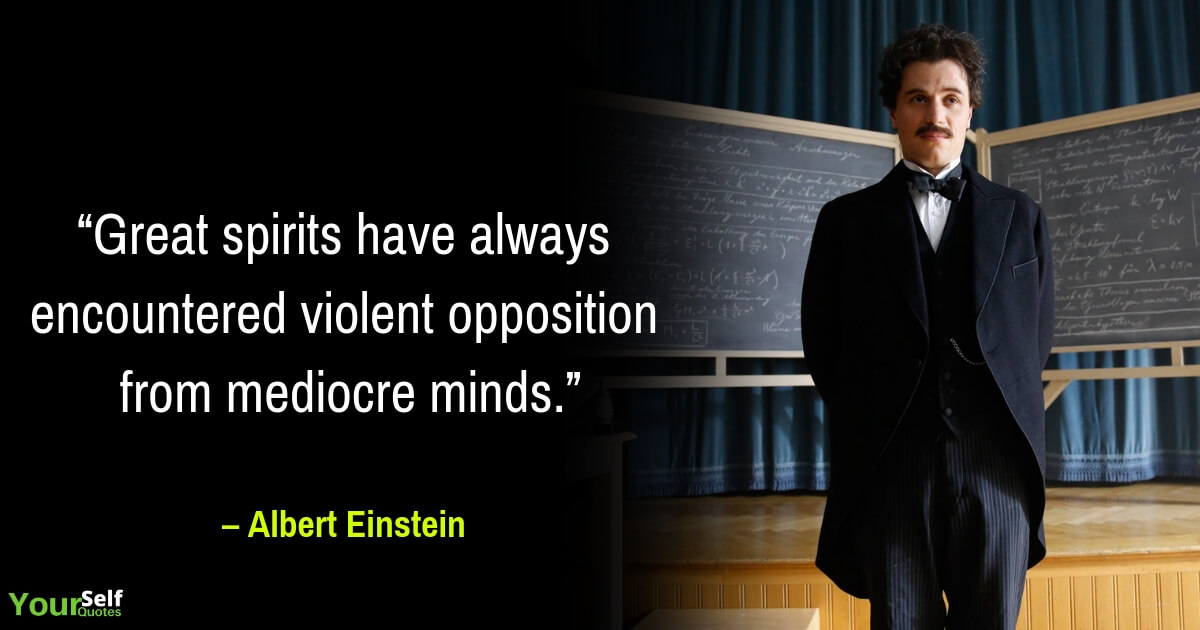 “Do not worry about your difficulties in Mathematics. I can assure you mine are still greater.” – Albert Einstein

“Science without religion is lame, religion without science is blind.” – Albert Einstein 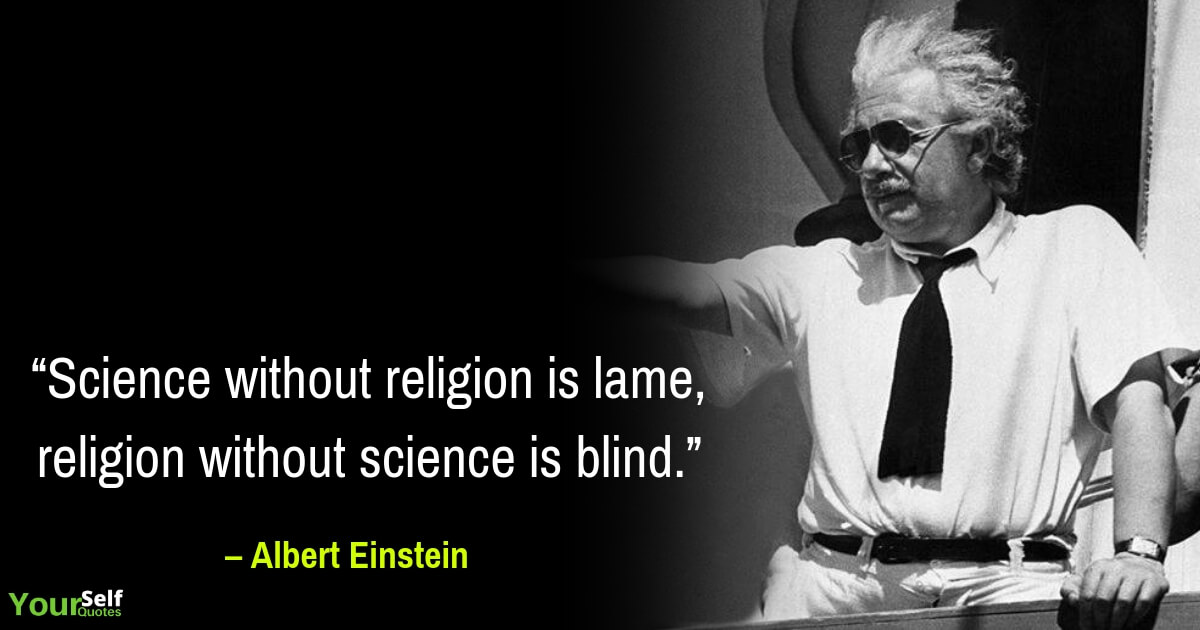 “We cannot solve our problems with the same thinking we used when we created them.” – Albert Einstein

“The environment is everything that isn’t me”. – Albert Einstein 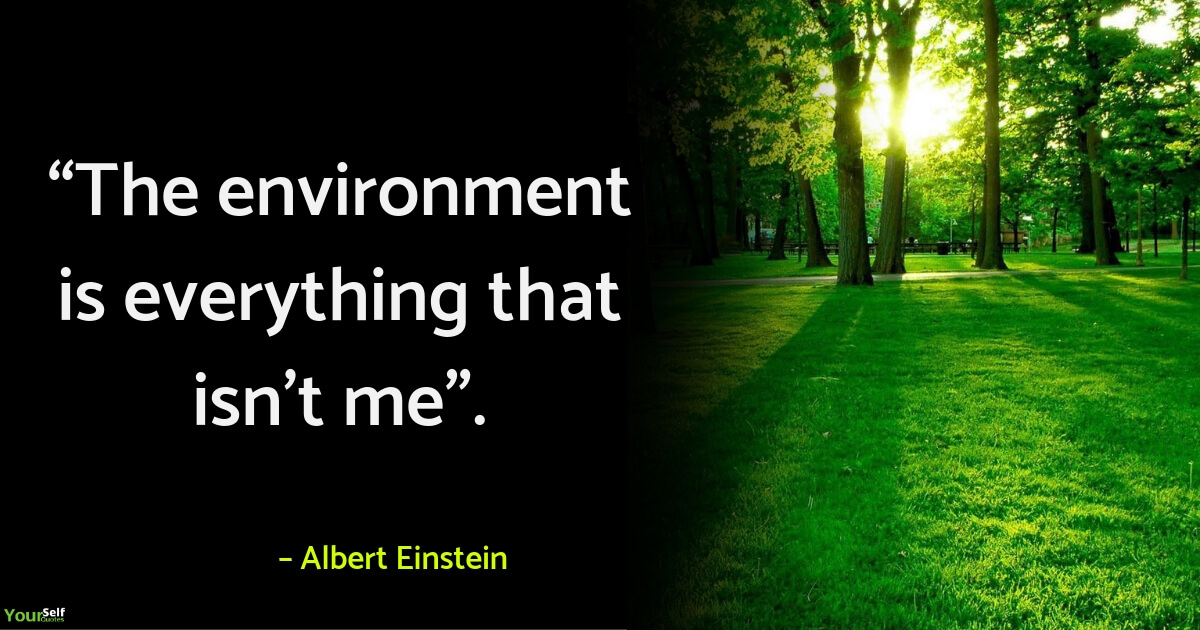 “The most beautiful gift of nature is that it gives one pleasure to look around and try to comprehend what we see.” – Albert Einstein

“Logic will get you from A to B. Imagination will take you everywhere.” – Albert Einstein

“Learn from yesterday, live for today, hope for tomorrow. The important thing is not to stop questioning.” – Albert Einstein[

“To raise new questions, new possibilities, to regard old problems from a new angle, require creative imagination and marks a real advance in science.” – Albert Einstein

“The important thing is to not stop questioning. Curiosity has its own reason for existing.” – Albert Einstein

“Intellectual growth should commence at birth and cease only at death.” – Albert Einstein

“If you want to live a happy life, tie it to a goal, not to people or objects.” – Albert Einstein 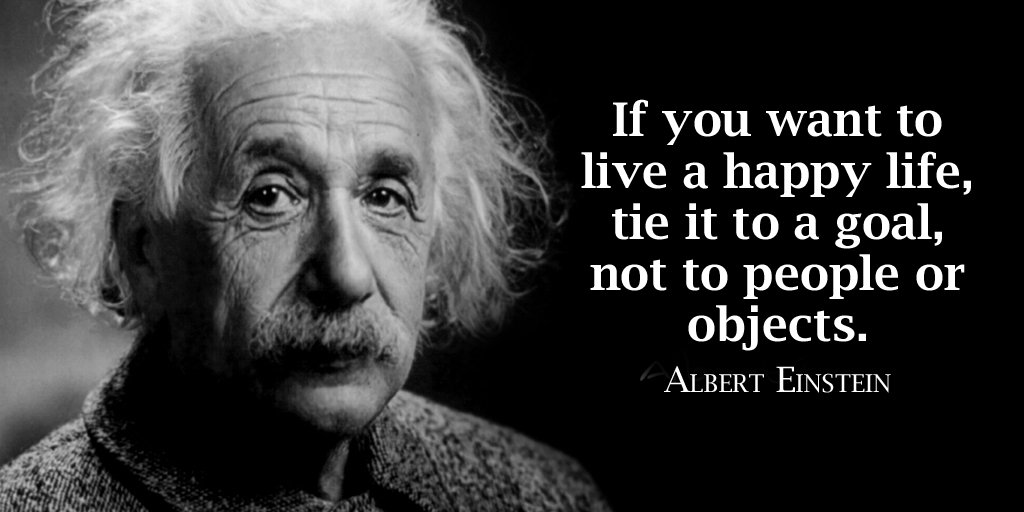 “Nothing will benefit human health and increase chances for survival of life on Earth as much as the evolution to a vegetarian diet.” – Albert Einstein

“I am thankful to all those who said no to me. It’s because of them I did it myself. ” – Albert Einstein

“No amount of experimentation can ever prove me right, a single experiment can prove me wrong.” – Albert Einstein

“Never give up on what you really want to do. The person with big dreams is more powerful than one with all the facts.” – Albert Einstein

“A person who never made a mistake never tried anything new.” – Albert Einstein

“I am enough of an artist to draw freely upon my imagination. Imagination is more important than knowledge. Knowledge is limited. Imagination encircles the world.” ― Albert Einstein

“I am thankful for all of those who said NO to me. It’s because of them I’m doing it myself. ” – Albert Einstein

Albert Einstein, a legendary published a scientific theory that would revolutionize our knowledge of gravity, time & space. He is remembered amongst famous theoretical physicists of the 20th century. Many scientists have done research on Einstein’s brain. They even suggested unusual features of his brain, which may be linked to his extra high level of intelligence. To gain insightful and experimental knowledge about him, read the most wonderful Quotes by Albert Einstein at Yourself Quotes and share with your near and dear ones.